Riddle Me This: What’s Pure, White, and Deadly?

The answer is sugar, according to John Yudkin and Robert Lustig, among others. The Age has the details. A quote:

[Robert] Lustig is one of a growing number of scientists who don’t just believe sugar makes you fat and rots teeth. They’re convinced it’s the cause of several chronic and very common illnesses, including heart disease, cancer, Alzheimer’s and diabetes. It’s also addictive, since it interferes with our appetites and creates an irresistible urge to eat.

This year, Lustig’s message has gone mainstream; many of the New Year diet books focused not on fat or carbohydrates, but on cutting out sugar and the everyday foods (soups, fruit juices, bread) that contain high levels of sucrose. The anti-sugar camp is not celebrating yet, however. They know what happened to Yudkin and what a ruthless and unscrupulous adversary the sugar industry proved to be. 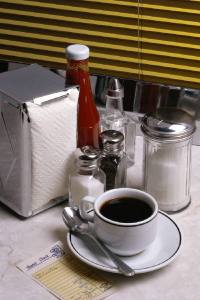 An occasional teaspoon of sugar probably won’t hurt you, even if you have diabetes

The U.S. Department of Agriculture estimates that added sugars provide 17% of the total calories in the average American diet.  A typical carbonated soda contain the equivalent of 10 tsp (50 ml) of sugar.  The average U.S. adult eats 30 tsp  (150 ml) daily of added sweeteners and sugars.

On the other hand, Fanatic Cook Bix found a study linking higher sugar consumption with lower body weight, which you might think would protect against type 2 diabetes, heart disease, and some cancers.

Read the rest at The Age. It’s mostly about John Yudkin.

Comments Off on Riddle Me This: What’s Pure, White, and Deadly?