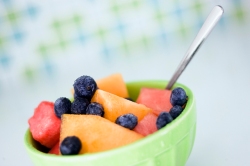 Low-carb doesn’t mean “meat-only”: You can eat these low-carb fruits

A low-carb diet was superior to a traditional low-fat weight loss diet, and without adverse effects on markers of systemic inflammation, according to a report at ScienceDaily. Some medical professionals are still hesitant to accept the validity of low-carb dieting, fearing that relatively high fat and protein content may promote inflammation, leading to atherosclerosis.  The study at hand should be reassuring in that regard.

Some quotes from ScienceDaily:

The researchers measured the participants’ blood levels for three common markers of inflammation — C-reactive protein, interleukin 6 and tumor necrosis factor-alpha — at the beginning and end of the study. They also measured body weight, body mass index (BMI) and total body and belly fat. At the start, both groups were similar in the various measures, including elevated levels of inflammation markers.

The participants on the low-carb diet lost more weight, on average, than those on the low-fat diet — 28 pounds versus 18 pounds [over the six month trial.

“In both groups, there was a significant drop in the levels of all three measures of inflammation,” says [Kerry] Stewart, indicating that a diet higher in fat and protein doesn’t interfere with the ability to lower inflammation, as long as you are losing weight.

Despite reading several online articles on this study, I can’t determine which low-carb diet was used, nor the level of carbohydrate restriction. Both diet groups exercised three times a week. I expect full details to be published in a scientific journal within a couple years. The research was done at Johns Hopkins University and was not funded by Atkins Nutritionals. U.S. taxpayers funded it.

If you’re looking for a low-carb diet, consider the Low-Carb Mediterranean Diet. Carb restriction starts at under 30 grams a day, but allows for increases over time as long as you’re making weight-loss progress. The typical American eats 250 to 300 grams of carbohydrate daily.

Read the rest at ScienceDaily.