Where Do Cashews Come From? 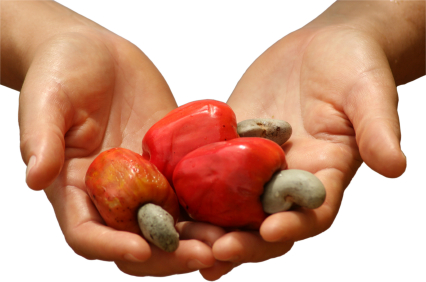 Cashews fresh off the tree. They’re fruits, not nuts.

A few quotes on cashews from “Medium”:

In the case of the cashew, someone, somewhere, a long time ago determined that it had to be roasted. The cashew was once nicknamed the blister nut, because if you try to eat it raw from the tree, your mouth pays the price. The cashew is not a nut, however; it’s a seed. On the tree, the fruit that contains it looks like a bloated green kidney bean or a boxing glove dangling comically below an upside-down red or yellow bell pepper, the swollen stalk of the fruit, called the cashew apple.

Just as the cashew isn’t really a nut, this so-called apple is a false fruit. Nonetheless, it’s juicy and edible, but it’s too perishable to ship, lasting only a day off the tree before becoming moldy and starting to rot, which is why it’s not sold in the United States. But in warmer countries…

Unlike other nuts (false or otherwise), cashews aren’t sold in the shell. That is because the testa skin, the inner lining between the outer shell (the actual fruit) and the kernel (the cashew), is toxic. A relative of poison ivy and poison sumac, the cashew contains the same rash-inducing chemicals, known as urushiols, as its kin. Heating the whole green fruit hardens this toxic stuff, allowing it to be separated from the seed. Once removed, this caustic goo is used in industrial materials such as waterproof paint, varnishes, lacquers, and brake linings, and meanwhile, cashew workers often suffer from skin and eye irritations and minor burns. The processing of cashews is therefore incredibly labor intensive, since most of the many steps—roasting, burning, boiling, soaking, cracking, and peeling—are completed by hand, labor performed by workers in factories primarily in India and Brazil.

This entry was posted in Nuts. Bookmark the permalink.