If Gut Bacteria Cause Alzheimer’s Dementia, What If You Alter Those Bacteria?

The short answer? We don’t know the answer to either of those questions.

The gut bacteria (aka microbiome) seem to be able to decrease or increase inflammation that could cause or exacerbate Alzheimer’s dementia. The  microbiome’s effect on inflammation depends on the species of bacteria present, and the amount of those bacteria. At least one study found that Alzheimer’s patients have a greater abundance of the pro-inflammatory species and less of the anti-inflammatory species, compared to other folks.

Researchers with Wake Forest School of Medicine tried to find answers to the questions in the title of this post. (Click for full text.) They studied 17 experimental subjects, average age 64, who had mild cognitive impairment (11) or “cogni/subjective memory complaints” (6). God bless them for submitting to three spinal taps apiece. The experimental diets were 1) Mediterranean-Ketogenic (under 20 g carb/day), or 2) Low-fat American Heart Association diet (under 40 g fat/day). Participants were on each diet for six weeks.

The investigators didn’t find anything useful for those of us trying today to avoid Alzheimer’s or prevent the progression of mild cognitive impairment to dementia. Their bottom line is, “The data suggest that specific gut microbial signatures may depict [characterize] the mild cognitive impairment and that the modified Mediterranean-ketogenic diet can modulate the gut microbiome and metabolites in association with improved Alzheimer’s disease biomarkers in cerebrospinal fluid.”

So we won’t know for several more years, if ever, whether intentional modification of diet will “improve” our gut microbiomes, leading to lower risk of dementia.

What we have known for many year, however, is that the traditional Mediterranean diet is linked to lower risk of Alzhiemer’s dementia.

In a small pilot study, the researchers identified several distinct gut microbiome signatures — the chemicals produced by bacteria — in study participants with mild cognitive impairment (MCI) but not in their counterparts with normal cognition, and found that these bacterial signatures correlated with higher levels of markers of Alzheimer’s disease in the cerebrospinal fluid of the participants with MCI.

Through cross-group dietary intervention, the study also showed that a modified Mediterranean-ketogenic diet produced changes in the gut microbiome and its metabolites that correlated with reduced levels of Alzheimer’s markers in the members of both study groups.

Two diets in one book, including the Ketogenic Mediterranean Diet 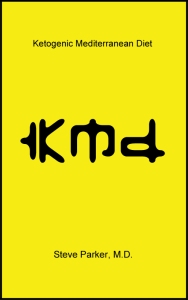 3 responses to “If Gut Bacteria Cause Alzheimer’s Dementia, What If You Alter Those Bacteria?”