R.I.P.: A Horse Named Steve; and a Neurosurgeon Confronts His Own Death

The New York Times online has the story:

As soon as the CT scan was done, I began reviewing the images. The diagnosis was immediate: Masses matting the lungs and deforming the spine. Cancer. In my neurosurgical training, I had reviewed hundreds of scans for fellow doctors to see if surgery offered any hope. I’d scribble in the chart “Widely metastatic disease — no role for surgery,” and move on. But this scan was different: It was my own.

Well worth your time to read unless you’re in denial of death.

A pall hangs over the Parker Compound since one of our horses died of colic yesterday. Certainly not the same as a human death, but still….

My wife and daughter rescued Steve from appalling conditions  eight or nine years ago when he was about seven years old. They named him after me for some reason—his original name was Wyatt. Sunny paid $200 (USD) for Steve, which is one cheap horse. Many horses are like boats and airplanes in that they may not cost all the much initially—it’s the maintenance and repairs that get you.

The seller in Apache Junction, Arizona, had him in a large pen with 20 or 30 other horses. At feeding time, the owner threw a few flakes of hay into the pen and then it was “survival of the fittest” time. Horses are not by nature sharing creatures. Steve was not high up on the pecking order. If she hadn’t bought him, he may well have ended up in a meat market.

Steve was originally my daughter’s first horse, not mine. For reasons forgotten, we got her another horse, Buckwheat. Steve was to be my wife’s horse then. Soon enough Sunny broke her leg and was out of commission for months. Horses, like people, need exercise. The most fun way to exercise them is to ride them. That’s when I first started riding Steve, to give him exercise. My daughter and a cowgirl named Angel Antan were my instructors.

I had an odd experience with him one time when my daughter and I were on a trail ride to the Verde River from our home in Rio Verde. If you don’t know how to ride, note that a horse isn’t supposed to move or stop unless the rider gives the signal. You can’t let the horse be in charge. We were in a dry wash when Steve suddenly stopped and started sniffing the ground. I had no idea what was up and thought I’d just sit there waiting to see what would happen. Soon and without warning, Steve knelt down on his front legs, then his back ones, and was on his belly, starting to roll over! I jumped off and pulled him up by the reins before he did the deed. You do NOT want a horse rolling over on you, or your saddle for that matter. He never did that again, nor have I heard of that happening to others.

One of the cool things about our trail rides is that you can get close to coyotes. When you’re on horseback, the coyotes don’t perceive you as much of a threat.

Steve always liked men more than women. It was only in the last few months that my wife and he became quite fond of each other.

My wife gave him a great home. He was a good horse who taught me how to ride. I always felt safe when I was around him and on him, regardless of the near roll-over.

He “colicked” every year for the last five years. I’d like to think that Steve’s in horse heaven with his buddy Buckwheat, running over grassy  hills and wading through clear streams. RIP, Steve. No more pain, ever. 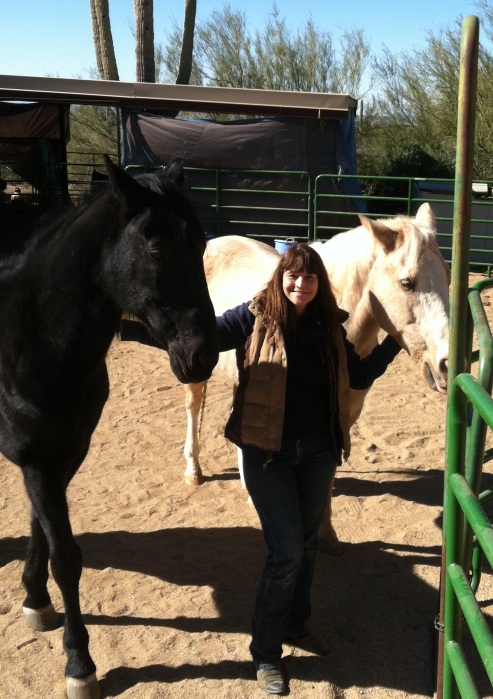 Steve is the palomino on the right

2 responses to “R.I.P.: A Horse Named Steve; and a Neurosurgeon Confronts His Own Death”